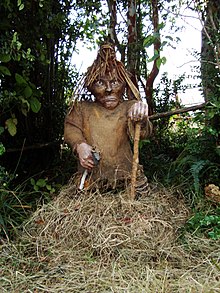 El Trauco is a mythological figure that belongs to the rich treasury of Chilote folklore (Chiloe is an island off the coast of Chile, very similar to Tasmania in relation to the mainland). According to the myth, if a young woman encounters El Trauco in a forest path, she should take up a handful of sand and throw it on the ground. This distracts the monster as he tries to pick up each grain, long enough for the women to make an escape. It is believed that if El Trauco looks you in the eye, he can make you pregnant. (see wikipedia entry).