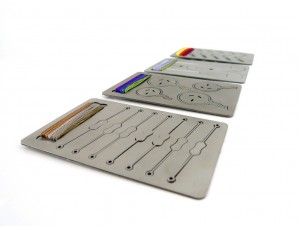 Activation
The donor detaches the charm, threads it with linen and administers it to the host.

Melissa Cameron comes from Perth, where she completed a Postgraduate Diploma in Jewellery Production at Curtin University in 2006. She moved to Melbourne and in 2009 finished her Masters at Monash University, specialising in jewellery under Marian Hosking. She has been particularly interested in the relations between architecture and jewellery. In Melbourne, she was one of the founders of Part B, a collective of jewellers who look at experimental ways of placing jewellery outside the gallery, in the street.

Jill Hermanns also studied jewellery at Monash University, completing her Honours in 2009. She has a particular specialisation in colouring metal, with particular expertise in the Japanese alloy shibuichi.

The ‘Charged Charm Card’ is a series of pop-out charms to be administered on the spot to the person in need. Full instructions are available here.