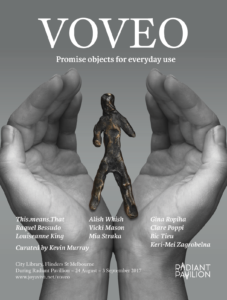 Voveo – promise objects for everyday use

Though the promises that help increase trust are usually made of words, the phrases ‘to make a promise’ and ‘to build trust’ allude to a process of material construction. Verbal promises leave no trace, unless they are formalised in legal documents such as contracts. The increasingly temporary nature of contemporary life works against long-term social bonds.

Trust is at the core of what sustains a community, but it is particularly fraught as cities grow and become more diverse. The issue of Islamophobia reflects on the sense that a recently arrived community in many Western countries cannot be trusted to behave appropriately.

The basic motive driving this project is to find a way of being useful in the world. While art clearly holds up an important mirror to reality, the challenge of design is to find ways of changing that world, hopefully for the better.

The first step involves examining the problem. When do we need help in making a promise? What would you do if you lost your bag in the city and had to ask a stranger for money to get home? How do you confirm the start of a long-term project partnership? How can a couple concretise their engagement without the patriarchal and exploitative diamond ring? How do you build trust with someone from a marginal group? There are countless situations where a tool for making a promise would be very useful.

The relational turn in creative practice has drawn attention to the capacity of art to connect people together. The discipline of Actor Network Theory considers how structures can give durability to society. These don’t determine what we do, but provide support for long-term relationships, just as the matrix of the beehive affords the making of honey.

Traditionally, the object has been an important means by which social relations have been bound. The heirloom connects generations, the amulet extends protection, the gift creates relations of indebtedness and the love token seals a union. What kinds of accessories help make promises? In modern societies, the holy book is often used to signify the sincerity of a statement. Before the legal system was fully developed, tokens of faith were sometimes attached to contracts, such as a peppercorn in lieu of a forest. And the wedding ring provides enduring testimony to the vows of marriage.

Following the Joyaviva platform, which fostered prototypes of modern amulets, Voveo (“I promise” in Latin) seeks to bring together various perspectives in a productive mix, in order to give birth to a series of promise objects.