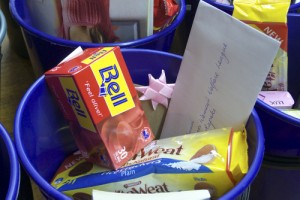 Activation
Residents are provided with provisions including the Nga Whatu Piataata brooch to assist with immediate needs.

Engage
For sales, please contact Caroline Billing at The National.

This work has been made in collaboration with the Maori Women’s Welfare League Rapaki Branch.

Areta Wilkinson is a Māori contemporary jeweller who lives near Christchurch. She is a member of the Maori Women’s Welfare League Rapaki branch, where she has been involved in community activities in response to the earthquake which damaged much property.
Wilkinson studied jewellery at UNITEC in Auckland, where she lectured 1995 to 2008. She is now studying for a PhD in the Māori visual arts department at Massey University. A distinct contribution of her work is the expression of Māori themes without explicit reliance on traditional materials. Much of her recent work draws on the pēpeha, a proverb of traditional wisdom that can be ‘worn’ as a body ornament.

Rapaki is a small seaside community surrounded by maunga (hills) & rocky terrain. The people who reside there are mainly Maori whanau (families), living on their ancestral lands close to their marae & wharenui (carved meeting house) & in their own individual homes. Rapaki had suffered severe damage from both September & February earthquakes with one home destroyed by a huge boulder that dislodged & rolled right through the middle of it. The Rapaki whanau continue to live with the possibility of this happening again at any moment by further aftershocks. Many whanau moved into their marae wharenui to live together for safety in the immediate weeks following the earthquakes.
Our ‘Aroha Buckets’ were prepared with aroha (love) to give them our aroha & awhi (support) as the aftershocks continue, and including the satin star brooches in the Aroha Buckets added a vivid touch of aroha & tumanako (hope). Because they were given out late May the inclusion of the stars gave a reminder of Matariki (Pleiades, The Seven Sisters – an open cluster of many stars in the constellation first appearance before sunrise of Matariki in the north-eastern sky indicates the beginning of the Māori year – about the middle of June) the stars hold great significance & comfort of new beginnings for Maori in the midst of the uncertainties, aftershocks & disaster we here in Christchurch were living through.
Wearing the bright red “Star” given to me on my winter coat, brought many positive responses wherever I went & I was reminded at each response of Matariki & hope.”

When ever I see the bright satin star brooches I think of our Taua (senior women) who have passed on, but had impact and influence on our lives as a whanau (family).
I guess it is similar to the philosophy of “Matariki” and how these stars in the universe make reference to seven sisters. I think those seven sisters could be our aunties, grandmothers and wahine still guiding us from afar. Haere,haere,haere atu ra nga wahine ma.

I often forget to remove brooches from clothing and my satin star is now ‘stuck’ to the coat I was wearing when Areta gave it to me. Now whenever I wear it, I remember the warmth of the women of Rapaki MWWL on a cold day in August.

We were ourselves filled with joie de vivre as we gathered up items to put into our League’s Happy Gift Buckets, and imagined the surprise and delight of the recipients. I feel connected to our League group and to those recipients whenever I wear & look at my satin star.

Ngā Whatu Piataata: Stars in my Eyes is an ongoing relational art project focused on this sparkling satin whetu (star) . The project so far has expanded from being sites of gift giving (acknowledging the ‘stars in my eyes’), to sites of exchange (interactive exhibition installation where star brooches are exchanged for photos of star wearers), and sites of appropriate knowledge transfer (star making workshops). The kaupapa (objective) proposed is Māori, and the project considers practice principles of manaakitanga (showing respect & kindness), whanauangatanga (relationships) koha (reciprocal exchange), taonga tuku iho (treasures passed on), and he korerorero (discussion) from a collective paradigm.

Images are taking from meetings of the Rapaki Maori Womens Welfare League meeting on 9 April 2011 and 11 June 2011, assembling and distributing gift pack contributions including  ‘Nga Whatu Piataata’ (photos by Mark Adams). Featured are the two halves of the Te Rangimarie Centre, which contains the league’s office. One half is intact, and the other destroyed by the earthquake. 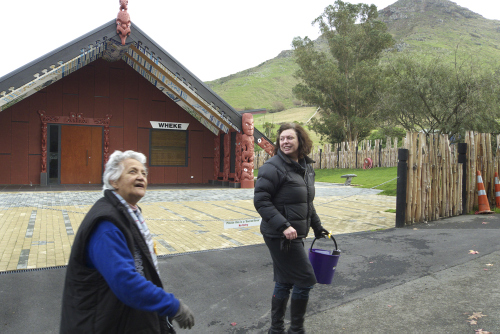