Luck by design: Artists speak about their work in the Joyaviva exhibition

A chance to listen to the curator and artists talk about the challenge of designing charms for a modern world.

For the exhibition Joyaviva, artists developed new charms to be worn for specific purposes. The exhibition features these charms alongside responses from their wearers.

Hear the artists reflect on how they designed the charms and the experience of sending them out into the world. Speakers will include Melissa Cameron, Jill Hermans, Jin ah Jo, Blanche Tilden and Kevin Murray.

Some recent related stories (here more at the stack):

Joyaviva is situated in an art gallery, strict rules apply to touching the art works. But there are some exceptions.

Sarah Read’s This Too Shall Pass is a series of tags attached to cards with images of the Christchurch earthquake. They have been lovingly stitched by members of the New Zealand jewellery community in solidarity with The National, a jewellery gallery which lost its premises in the quake. For $10, you can take one of these cards away. It makes a touching gift for someone experiencing another kind of shock, and in the process you can discover gold underneath. 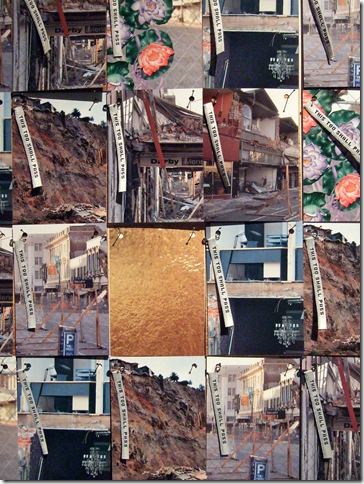 If you are interested in obtaining other charms, refer to the website. Though if you look closely through the materials in the gallery, you might be able to obtain a gold charm for yourself.

Meanwhile, feel free to do some flower arranging. 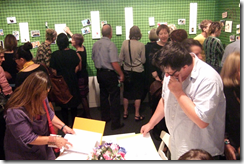