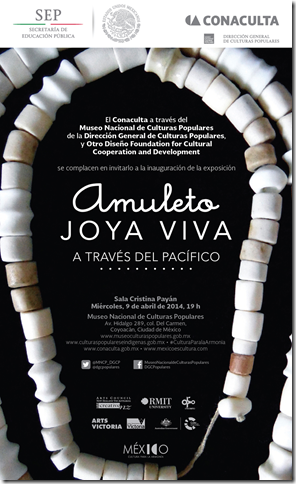 Joyaviva: Live Jewellery Across the Pacific is a project that makes connections between Australasia and Latin America through a quest to develop the modern amulet. This quest draws on the creativity of jewellers,  local traditions, and particular social conditions. Common issues are life after an earthquake, sitting exams, connecting generations and counteracting the violence of urban life.

After exhibitions in Melbourne, Sydney and Auckland, Joyaviva crossed the Pacific and has just opened by the Australian Ambassador Tim George in Mexico City at the Museo Nacional de Culturas Populares, where it was joined by nine new works by Mexican artists. A special bi-lingual catalogue and website has been produced. See photos, article in Jornada, audio of opening and video of colloquium.

According to curator Kevin Murray, ‘It was important that a project like this connects with the culture of Mexico, which is so rich in tradition and invention of amulets. We have much to learn about the way Mexicans have dealt with personal problems through these shared symbols of hope. To this, we bring a fresh space to think again and adapt these charms to modern issues, like drug violence.’

After Mexico City, Joyaviva will travel to La Paz, Bolivia and Santiago, Chile.

The exhibition is supported by Council of Australia-Latin American Relations COALAR, Arts Victoria and Creative New Zealand. The project is associated with the Art Cities Transformation research centre, RMIT School of Art.